‘If I have kids, I’ll make sure they’re boys’ – two women in conversation at the Horsehoe pub, Thurlby.

The mental overstimulation of travelling is taking a toll. Right now I’m happy to pay. I’m loathe to leave Hunstanton, but I’m hungry for new sights, and besides, I’ve never been to Lincolnshire before. Now is that time.

I awake tired and preoccupied with more fretful dreams. I strike up conversation with my dorm-mate, a young architecture student who tells me about his bold vision of pedestrianizing Parliament square. He describes his plan in detail, with a great public structure representing freedom at its centre. It’s the first new vision I’ve heard in a while, and the courageous belief in something new is heartening. His name was Mischa, and I wish him well. 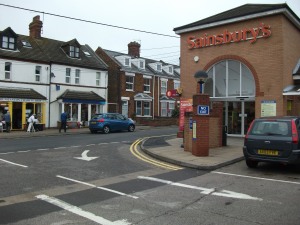 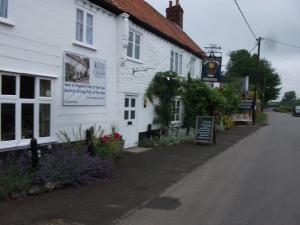 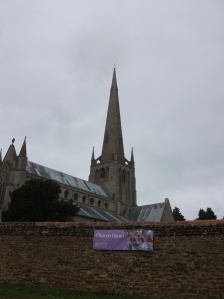 I wander out to get my breakfast, lunch and dinner at the supermarket. It’s the only way I’ve managed so far to afford to eat nutritiously and cheaply. Mainly raisins and nuts, bananas, and tortilla wraps with grated cheese and beans. It may sound like the diet of a nomadic shaman but it’s packed with calories and protein and damn cheap. I glance over the local newspaper. The lack of news within is superb.

Outside, a group of old men are complaining about their jobs which seem to come through a workfare scheme, presumably at the supermarket. One wanders up and says he’s just quit. “I’m sick of being picked on by … ”. The idea of these men clearly skilled at something yet stacking shelves seems absurd, but it has become a normal situation across the country for people whose industries were terminated, and who were sent on one training scheme after another til they’ve ended up here. Illiteracy’s a big problem among the long-term unemployed. Listening in on their conversation, I realise that it’s not just the young who have been failed by these current economic prop-ups to financial capital and inherited wealth.

I head to Hunstanton library to finish the previous day’s write-up. Like a lot of libraries in Britain, the library is busy today, but no-one is reading books. People wait for computers to browse Facebook and pick their nose. A local restriction is in place against bringing your own paper to print on. I’m a great lover of the foibles of libraries and the curious people they attract. In London it’s a little similar, plus a much larger homeless/migrant population. Our traditional respect for the written word has kept this one public institution in existence, albeit endangered by local cuts. 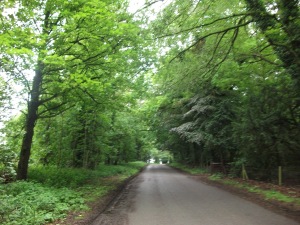 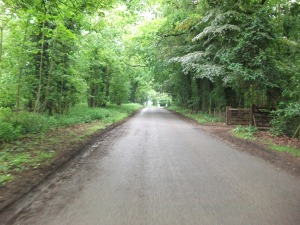 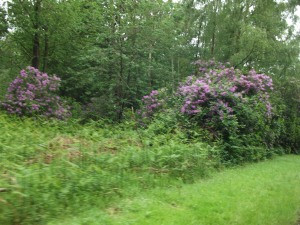 The journey from Hunstanton towards Kings Lynn is lovely. I weave through the Norfolk countryside past old churches, where grouse potter about confusedly in winding lanes and rabbits chase my progress in surrounding fields. I have come to love this countryside and its gentle sights and smells. I pass little old villages before reaching Sandringham, where the royal grounds are busy with visitors poking about the manicured grounds. There is a delicious smell from the forests here, as from Deringham forest which I pass earlier.

I make it onto the main-road, and drift into the suburbs of Lynn, of an increasingly predictable yellow and red-brick detached style, sky dishes and transit vans. The path passes through a long series of unused parks and recreational grounds, full of bored teenagers and robustly unfriendly people, angry in word and gesture. No-one looks like they want to be here. A mood of depression hangs with the day’s cold mists.

There’s a casual toughness here that I’m familiar with. It reminds me of south London, where frustrations are also coded into the infrastructure and landscape, the overcrowded buses and stale shops, the lack of things to desire. There, people quickly drop their guard after a couple of friendly exchanges. It’s true here to a degree. 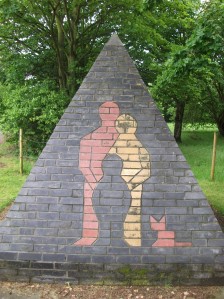 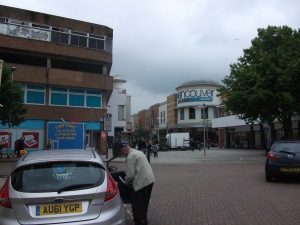 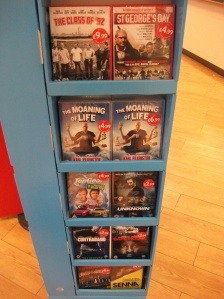 The road gladly dumps me next to an Argos. The previous day in Hunstanton I popped into a video rental and digital camera shop, perhaps the two most obsolete technological forms to base a business on, and was told that the specks in my lens would not disappear without some rigmarole. I buy a new camera and test it on the scenery around me. Chain stores of every predictable kind don’t make for inspiring photography, but this is journey into life as it really is. So what is here?

The town is immensely ugly, but is it unique for it? The centre of Kings Lynn is a disorganised mishmash of chain shops, poorly organised traffic systems and bad housing, just as Bromley or Croydon are in south London. (Though perhaps unlike London, there are virtually no police around, which makes the place feel safer). People glare at each other with nosy suspicion. Many are overweight, or appear generally unwell.

But the town gives a more realistic representation of contemporary Britain than the rural idylls and holiday towns I’ve passed through so far.

I wander round, following the shoppers in the pedestrianized precincts, before trying to find the old town, which consists of a couple of buildings next to the River Ouse, one of which now belongs to the local probation service. The town has a richer history, of great wealth acquired in the pre-capitalist Hanseatic League, but there is little sign of it. 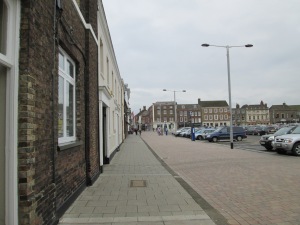 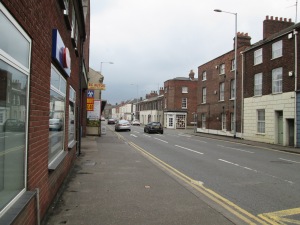 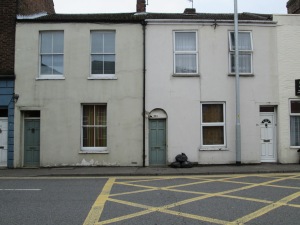 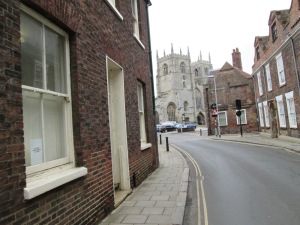 It is around 4pm and I have to move on. Getting out of the town is really confusing, and I end up getting lost and stuck on the A17, a tough and busy road heading to Sleaford. I pedal away in the hard shoulder for an hour, absorbing the flat and agricultural landscape with some interest.

Passing into Lincolnshire, there’s a definite sense of change in the appearance and use of the land. Whilst along the Norfolk broads the fields seemed unused and conserved in some way, here everything seems put to work. Huge greenhouses span the land, whilst common brands like Prince’s tuna, Carlsberg Danish lager and Kerry foods all have factories here. Huge freight trucks full of fresh produce skitter by. In the towns everything seems to resemble parts of London forty years ago, full of pubs and fish and chip shops. The social composition of the area would seem to have been kept relatively intact by the availability of factory jobs here, in a way that wasn’t possible for areas like London or the North-west where industries were dismantled. 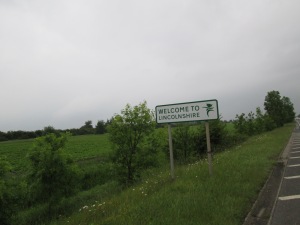 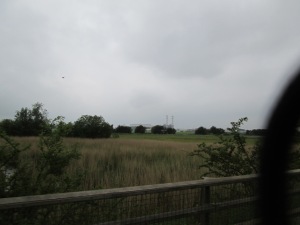 It’s an ugly yet compelling landscape, tough and plain. It feels like this is where things are made. I pass over Sutton Bridge, where once King John lost most of the crown jewels when his carriage was swept away by rising river-levels. Now, it is a place of kebab shops and hairdressers, pubs and chippies. Compared to Norfolk there are very few churches and no real indicators that anything historically or culturally significant occurred here.

It’s a bungalow-land in the small towns I pass between Sutton Bridge and, eventually, Spalding and Bourne. A good few have St. George’s flags up on poles. The proximity of Sleaford has me thinking of the Sleaford Mods, a couple of blokes based in Nottingham, where I’ll be in about a week and not far from here, whose music is a barrage of pent-up pissed off rage at the modern world. It seems to fit the mood here. I want to stay a while here and find out more about people’s frustrations, but I wouldn’t know where to begin. Most of the pubs are closed up and few people are around. I’m in a part of England that’s never been heard before, that most wouldn’t guess it even is how it is. 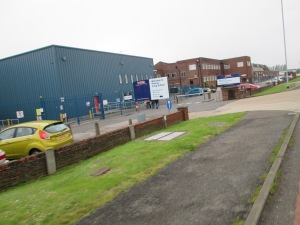 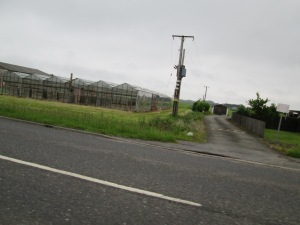 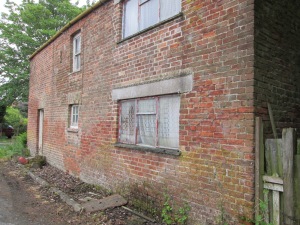 This feeling is further confirmed when I get to Spalding. On arrival it seems like another down-at-heel market town of the sort I’ve been coming across regularly, flanked with warehouses and large stores with a mediocre town centre of pubs and poundshops, Indian and Chinese takeaways, off-licences and betting shops. Yes, it is that in part (though there are few open pubs here), but it is also full of Polish shops, and employment agencies targeting Poles, with ads written in Polish.

The majority of people I pass don’t speak English, but nor do they Polish, but other tongues I can’t name. They are probably casual farm workers from eastern Europe, willing to work for low pay, and who in turn are not protected, nor even well-regarded, by the ‘buy British’ fruit and veg shoppers who depend on these people for the low prices of spinach and strawberries.

Contradictions run deep. I want to talk to them too. But I see no Polish bar or anything of that kind open, and most of the exhausted and skinny-looking labourers are wandering home with shopping bags full of bottled Polish beer. 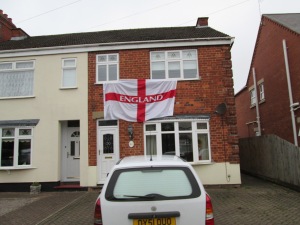 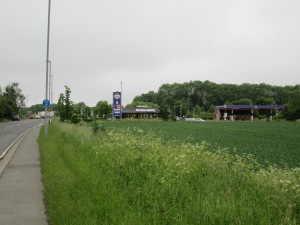 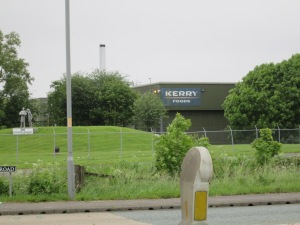 ‘It’s hard to live in the country, in the present state of things. Your body gets pulled right back, you get a terrible urge to drink’ – The Fall.

So much is being made here, in a country where many think nothing is made. Yet I’ve never heard much said of the area. It seems blacked out, from its locals to the large Polish community. There’s also a large Romany population in Spalding too. Beneath the appearance of a shit market town are rich histories and evidence of peaceful, mutual co-existence. Yet these peoples even more poorly served, denied status as equals by immigrant/gypsy-bashing journalists and parties, living in areas that are poorly built and badly served by transport.

Nothing is being said, everywhere is silent. This is the first place that seems truly free of anything London. Even the experiences of Poles I’ve met in London, from ambitious academics to chefs and bar-staff, seems quite distant from the types of work and community here. But I’m still remote from it too, just a man passing on his old bike. It’d be worth someone spending time here, immersing themselves in this unheard landscape. 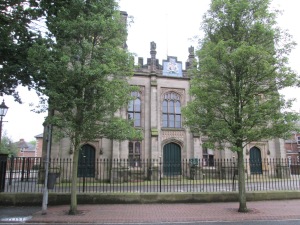 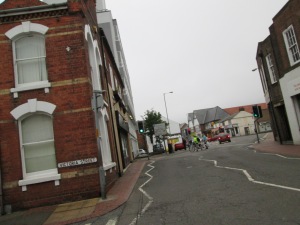 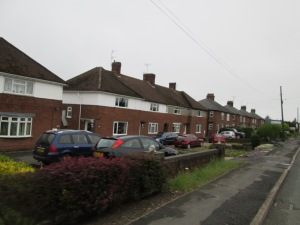 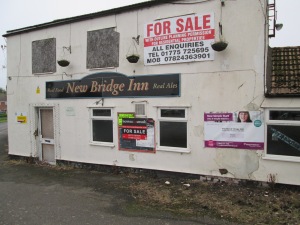 I finally get to Thurlby, just south of sleepy Bourne. It has been another eye-opening day. It’d be absurd to think a new political idea would take root among the tough, mean, hard-working and hard-headed people I’ve come across today. I make generalisations, but that’s the liberty of being a stranger. But if bungalows and huge-scale farming can entirely reshape the landscape here, then other forms of communal housing and equitably-distributed farming could have similar effect.

Later, I head out to the one local pub in the area, again deserted, where the barman serves me in haste and rudeness, and later, two friends come in and, amongst other things, complain about the ‘pikeys’ with their pushchairs. Oh the spiteful and idiotic contradictions of albion.

2 thoughts on “Day 8: Hunstanton to Thurlby”