‘You know what the difference is? At the weekends, people in Finland go out to their homes in the countryside, they exercise, they enjoy the air. In Glasgow, they just go to the shops.’
‘And drink!’
– Tommi and Michelle, Glasgow.

Warning: Glasgow is a small universe. Capturing it in an economical amount of words has proven more difficult than any place I’ve visited. As my write-up’s turned out so long (and yet I’ve omitted so much), it’s been sub-headed into days which can be read separately. But I dare not separate them into chapters. Just like the city itself, one element necessarily informs another and interweaves with it. If reading this on a web browser, I advise for the sake of time not attempting to read in one sitting. Same goes to the around 600 email subscribers to this blog.

Day 63
Cherish those mornings where there’s no need to rush. When the alarm clock states the time factually rather than coercively. Get up now, or in half an hour? It doesn’t particularly matter. The pillow has taken on the texture and proportions of a heavenly cloud. Let the morning become afternoon without us dashing around, shoving on our shoes whilst hurrying out the door in a commuter’s cossack dance. The world will continue in its same majestic and ludicrous whirl without us bearing witness to it. Placing a quilt over one’s head is a perfectly respectable way of dispelling life’s demands for another day.

It’s a pleasure waking up slowly in Glasgow at Tommi and Michelle’s. Tommi I met previously in a pub in Dornoch: he invited me to stay with him when I arrived in Glasgow, and kindly lived up to his word. I met Michelle and Nico, his wife and son, the previous afternoon. Michelle’s a native of Dumbarton, but a career in business management brought her to Finland, Norway and back to Glasgow. She’s suffered from MS in more recent years, but has used her experience and skills to assist the MS Society with its campaigns and organisation. Nico is a nineteen year old tennis maestro. As can be the case with young men, he bounds away with more energy and life than life itself can keep up with, which can lead to a kind of post-teen/early twenties dislocation where what one should do isn’t clear, and indecision paralyses. Over cereal and tea – after camping, such luxury – we talk for some time about Glasgow and Scotland. There’s no need to rush, and each topic is treated carefully, without shortcutting to received wisdom or printed opinion as so often blights much discussion of current affairs. 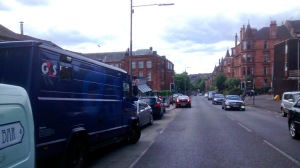