‘Look, I’m an otter! And now, I’m an eagle!’ – young boy, aboard the Lochranza-Claonaig ferry.

I awake in Bill’s house in the village of Sannox, on the Isle of Arran. It’s a palace of a home, displaying the riches of a life well lived: photographs, mementos, books and random treasures. I read the motivational verses on his fridge and have a cup of coffee with some Weetabix, whilst in another room, I hear Bill’s gentle and merry voice bubbling with laughter on a phone-call with an old friend.

We breakfast together and share our plans for the day. That Viking longboat in Corrie harbour will be burnt in an Up Hella Aa celebration later today, Bill tells me, and he shares some of the histories of Arran, an island colonised by Vikings, amongst others. The Hebrides, islands of the Firth of Clyde (like Arran), and the Isle of Man once comprised the ‘Kingdom of the Isles’, a separate political entity that existed from the 9th to the 13th century, when it was absorbed into the kingdom of Scotland. Irish, Pictish and later Viking settlers arrived and each claimed some or all of the islands, but the Viking influence was more lasting, Bill tells me. I sense it in the names of places, and in the probability of its historical veracity, but unlike Shetland or even, to a degree, Newcastle, I get little sense of it on Arran. But then more recent ‘colonisation’ by retiring Glaswegians brings its own flavour! 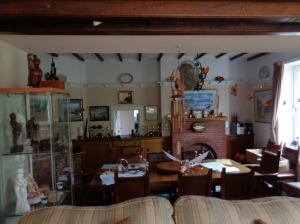 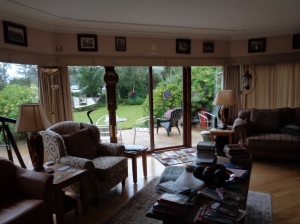 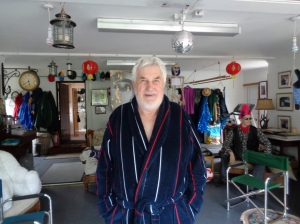 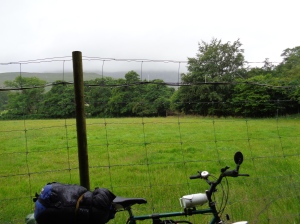 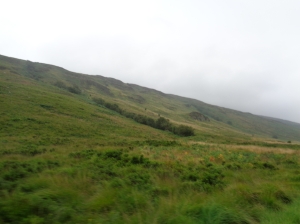 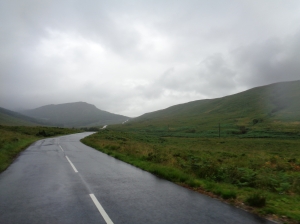 END_OF_DOCUMENT_TOKEN_TO_BE_REPLACED

‘It’s like a circus up there’ – man in tourist office, Fort William.

There’s far worse places to wake up hungover and aching than the foot of Ben Nevis. Intuition guided me to a good spot behind a large fug of ferns on a Glen Nevis back road. Rain is gently falling, horizontally as well as vertically it would seem, and a thick mist hangs over the head and dampens the ears. It’s no day for scaling peaks, but in the distance I hear groups of men in the distance visitor car-park psych themselves up with Maori-style chanting. I picture David Brent leading them on, clapping and leering.

I head into Fort Bill in anticipation of a special event. The Queen’s Baton relay will be passing through here, aye, on its long and meandering way to Glasgow, but it’s not that. My younger brother’s decided to come up here on a bit of a whim and see me for four days. He’s about to turn twenty six, and feels the need to leave the capital, even just for a few days. 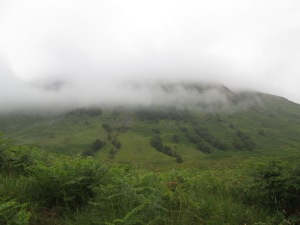 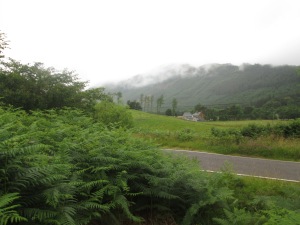 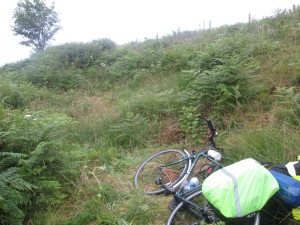 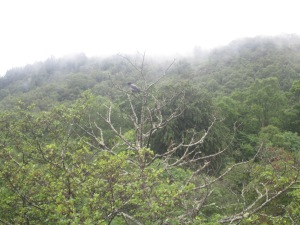 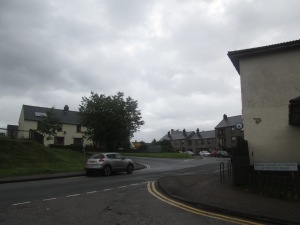 END_OF_DOCUMENT_TOKEN_TO_BE_REPLACED

Thibault and I awake in our separate quarters of this mostly-refurbished flat in Thurso. It’s an unloved town on Scotland’s northern coastline, and the end of the line of the railway route that runs from Inverness to the very end of the land. I stayed up late the previous night talking to my partner on Skype and then writing. The alarm wakes me up several hours too early, but it’s no good: time to get up.

We breakfast on bananas and shreaded wheat. Our warm host, John, pops back in from the other nearby flat he’s doing up, and conversation kicks us all awake. The morning’s subject is midges, a terrible scourge of the north western part of Scotland. Thibault tells us about one man he heard about who became so crazed from midge bites that he began to scratch away at his face and arms, inflicting terrible wounds, until he had to be sedated in hospital. I’m frightened for the days ahead, and John offers to give me a lift to a nearby fishing shop where there should be some kind of better protection beyond a trucker hat, flapping hands frenetically, and DEET cream.

Thibault boards a bus back to Inverness, off to continue his walking across as yet-unknown parts of the Scots hinterland. John and I drive through Thurso’s small town centre. There’s a prominent church and a small area around a few streets with some grubby shops, but much of Thurso is of an ugly dark-yellow/brown brick or of pebble-dash. Low-levelled narrow streets continue on an improbably long scale with ugly houses and shops. The town’s dirty appearance gives the impression of wearing beer and sand spattered sunglasses. 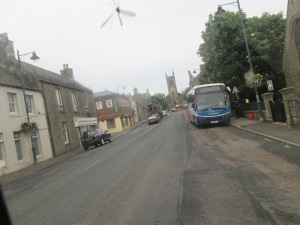 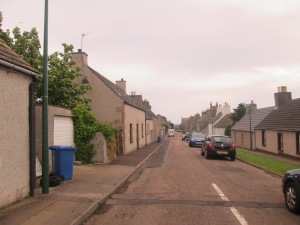 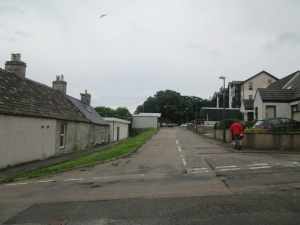 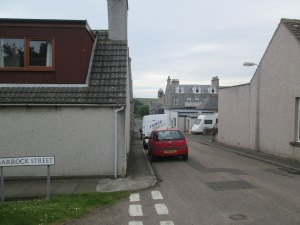 END_OF_DOCUMENT_TOKEN_TO_BE_REPLACED

‘It’s extraordinary.’
‘It’s brilliant!’ – Aiden’s reply, on the life and death practices of the Neolithic people of Orkney.

A couple of days back, I found out that wind farms were a visual pest on Orkney. Having spent the night sleeping under one, I can say that they’re not so bad, sonically speaking. The night’s howling wind sent the turbine propeller into warp speed ten, but its gentle hypnotic patter and the tent’s protection from the rain combined into a cosy cocoon.

In the morning light, my tent and I find ourselves ridiculously exposed to the string of houses near opposite. I pack up furtively, and cycle back to Kirkwall for a second examination. At night, the harbour town was deserted and intriguing. By day, it is bustling with tourists, locals, and people plying some kind of trade towards each. Along its semi-pedestrianised narrow main lane, I pass puppeteers and horse-drawn carriages by the tourist cafes, mega dealz discount shops and gift stores. The bait? Laid out nearby are the grand St. Magnus Cathedral and the ruins of the nearby Bishop’s and Earl’s Palaces. Around nine tenths of the current population of Orkney seem to be around these two proximate sites, documenting any kind of visual feature with the kinds of cameras that a decade back paparazzi would have sold their mother’s kidney for. 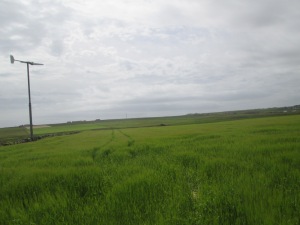 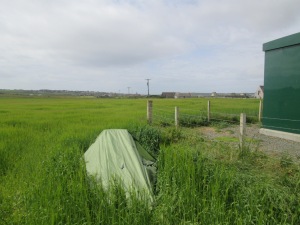 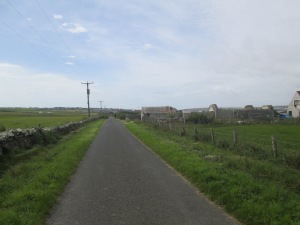 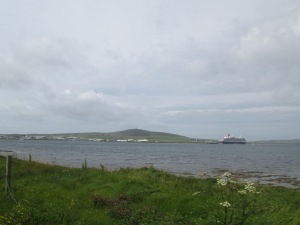 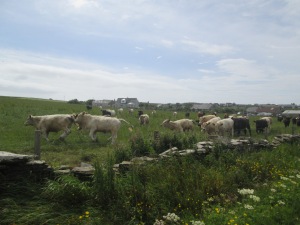 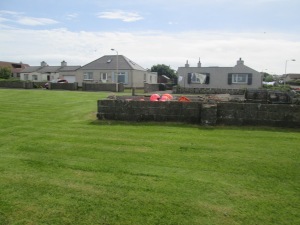 END_OF_DOCUMENT_TOKEN_TO_BE_REPLACED

‘Excuse me, are you from Tain?’
‘No.’
‘What’s it like round here?’
‘There’s bugger all. You’re better off going back to Inverness.’
– Conversation with a man outside Asda, Tain.

Ah, Inverness. You once seemed like the very definition of distance, a remote town that I associated in my mind with a 5pm curfew and snowfall in June. As ever, travel rubs away the ignorant patina that comes with a parochialism I never suspected I had, but no doubt harboured. Visit Inverness? Yes, because it’s not too bad a place.

I awake in the best hostel by far of this trip. The Inverness student hotel is cheap, cosy, and very friendly, and for a mere two quid I get a giant’s breakfast of juice, home made scones, piles of toast and bowls of cereal. There’s free coffee, tea and wi-fi! Sat in the main area, conversation casually flickers between whoever you happen to be sat next to. Young and old people sit about from across the world. I feel like I’m fifteen again, on the threshold of discovering so many different parallel lives, each alive with energy and adventure. It’s dizzying and exciting. 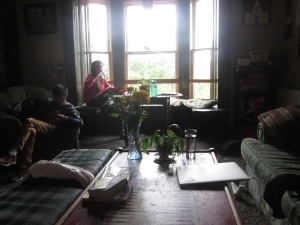 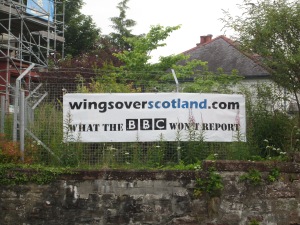 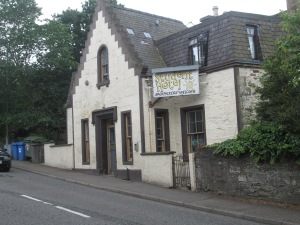 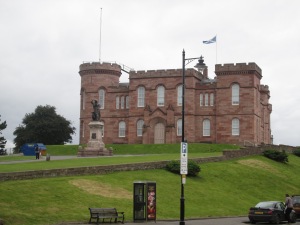 END_OF_DOCUMENT_TOKEN_TO_BE_REPLACED

Life and I are getting wilder and weirder by the day.

I am to all intents and purposes in the middle of nowhere, immersed in a landscape I have never experienced before, one of rich, verdant forests, the steepest of mountain crags, and little living except birds and vegetation. In other words, everything. I am tumbling through towns with no preparation, guided by the road and the conversation of people in streets, pubs, chippies and other passing places. Camping now feels less like a desperate second best and instead the proper way of experiencing the terrain, sleeping among it, smelling it, being disturbed and thrilled by it.

And the dawns…! I’ve known nothing like it. Everything feels so far removed from those codes of common life I left behind in London. Work, work, and… work. There’s no value in those codes here. A few times now I’ve heard older people speak derogatively about ‘having a piece of paper’. The paper qualifications like those I’ve got might help procure a stressful and insecure job in the lower rungs of the professions where burnout and breakdown are as common workplace injuries as lower back pain or carpal tunnel syndrome are for labourers. 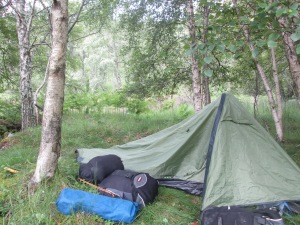 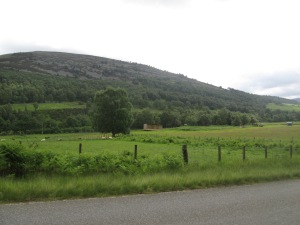 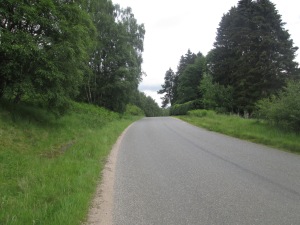 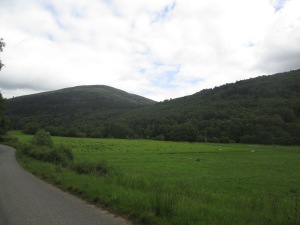 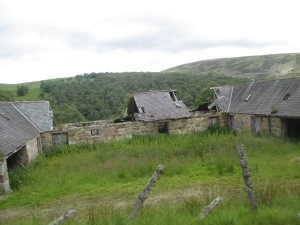